Members of the Indigenous Folks of Biafra (IPOB) in Israel are planning to stage a protest to the Israeli seat of energy (Knesset) in Jerusalem to demand the unconditional launch of their detained chief in Nigeria, Nnamdi Kanu.

Our media home learnt that IPOB in Israel are organising the protest which can begin from All Saints Anglican Church, Tel Aviv by 8:30 am on Monday, twenty seventh December, 2021.

This was contained in an e-flier signed by the Coordinator, Obiora Ibezim and Secretary Sunday Nwankwo as seen by press on Tuesday. 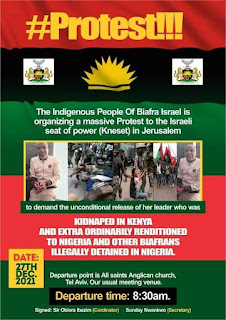 The poster partly learn, “The Indigenous Folks of Biafra Israel is organising a large protest to the Israeli seat of energy (Knesset) in Jerusalem to demand the unconditional launch of her chief who was kidnapped in Kenya and further ordinarily renditioned to Nigeria and different Biafrans illegally detained in Nigeria.”

Kanu was dropped at Nigeria from Kenya in controversial circumstances in June 2021, Altouh Kenyan althourity have openely denied involvement in what Kanu Lawyer termed further ordinarily rendition. Kanu is going through allegations of treason levelled towards him by the President Muhammadu Buhari’s authorities and has appeared a few instances earlier than Justice Binta Nyako of the Federal Excessive Court docket, Abuja.

His subsequent courtroom case is slated for January 18, at the same time as his two outstanding authorized representatives, Ifeanyi Ejiofor and Aloy Ejimakor have protested his continued detention on the facility of the Division of State Companies (DSS) which has denied him his elementary human rights.